Calcium is very important for strong bones and when you think about calcium, milk is the first thing that comes to mind.

However, if you are intolerant to lactose then, almond milk is one of the dairy products that are suitable to drink.

It is the best alternative for dairy milk as it has calcium as well as other nutrients. It is the most popular milk available in the market. Beyond the traditional cow’s milk, the milk section has expanded a lot.

Now the question arises can almond oil be frozen? The answer to this question is simply yes we can.

The color, taste, and texture will get affected a little bit however, vigorous stirring and good blender get back to its original form.

In this article,  we will discuss how to store, freeze, and thaw almond oil to use it properly without getting bad.

How to freeze Almond milk?

Yes, almond milk can be frozen but there are some advantages and disadvantages of freezing almond milk. Below is the detail mentioned.

Apart from benefits, almond milk has some side effects too. Though shelf life can be enhanced, there are some drawbacks as well and some manufacturers do not recommend freezing.

Should you freeze Almond milk?

Is it worth it?

Many producers of almond milk do not suggest freezing for two points.

The flavor and textural changes

Almond milk is comprised of small particles suspended in 88% solution of water. Fundamentally they are

The water molecules begin to organize themselves as the temperature drops pushing the other components to the bottom.

The fat layer eventually freezes as these dissolve into the fat layer because it is heavier in comparison with water.

When to freeze Almond milk?

Try different brands to get the best-frozen almond oil. Some of the oils freeze better as compared to others and selecting one is based on personal choice.

How to freeze Almond oil? 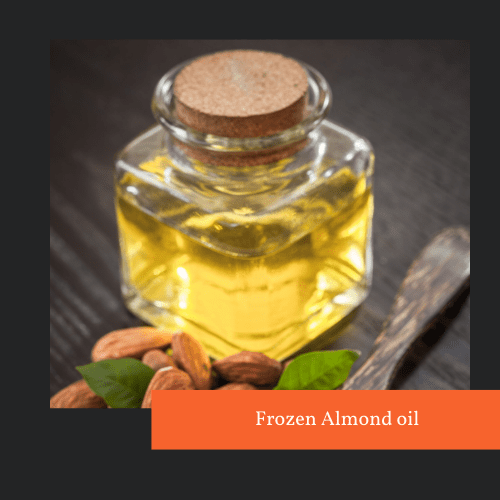 Below are the ways of freezing almond oil to increase the shelf life of the oil without getting spoiled and can be used after the date of expiry.

Freezing the almond milk in ice cube trays is very easy to defrost directly as much as you require.

The volume of the single ice cube is measured to calculate the number of cubes to defrost for a recipe.

Almond milk must be thawed in the fridge however, room temperature must be avoided:

Almond milk has a shelf life of 3-5 days after defrosting.

How to Defrost Frozen Almond Milk

To defrost the almond milk, there are many options.

Thawed milk is used in many ways.

When to Freeze Almond Milk?

Similar to other dairy and non-dairy milk, almond oil also gets spoiled. After thawing even frozen milk goes bad. The spoiled milk is not suitable for consumption as it causes

Now let’s lookout for the signs of spoiled milk.

The spoiled dairy milk can easily be differentiated by sour smell or appearance but the nut milk is difficult to differentiate.

Following are the signs of spoiled milk that is not good for consumption.

The answer to the question is yes you can freeze almond milk but milk should be defrosted when required.

In this article, we have concluded that almond milk can be frozen to enhance the shelf life and consume before getting spoiled. Almond milk is the best alternative to dairy milk. Spoiled dairy milk causes many health problems so freezing is the best solution to preserve milk for further usage.

1. Can you freeze almond oil?

Yes, as almonds have oil in it, it goes bad at high temperature neither it stays well at normal temperature so freezing the oil is the best solution to preserve the oil.

2. Which oils should be refrigerated?

According to research, oils are comprised of polyunsaturated fatty acids like a seed, nut, and fish oils are exclusively affected by the oxidation process so they must be refrigerated.

Just like other milk, you will get affected by drinking spoiled almond milk. It causes food poisoning. Almond milk might have fewer bacteria as compared to dairy milk however, the spores of the bacteria might still grow if the container or jar is left open.

You should refrigerate almond milk and follow hygienic handling and storage.

Studies show the best way to enjoy almonds is to soak them and remove the skin. There are tannins in the skin of the nut which hinders the absorption of nutrients completely. In addition to this, the skin is hardly digested.

5. Can you freeze smoothies made with almond milk?

The smoothies can be frozen in any container or jar that is freezer-friendly or else if the smoothie expands on freezing the glass might break.